What Kinds of Weapons Can I Legally Possess in California? 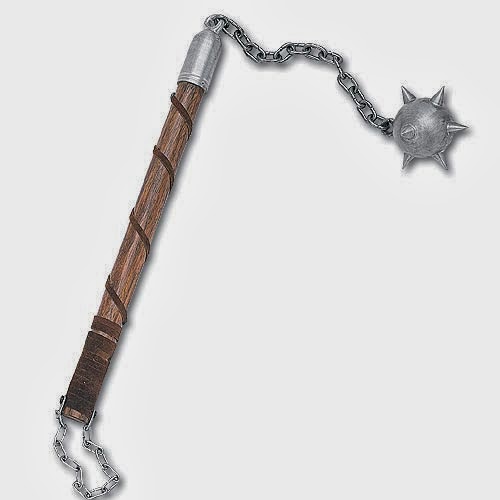 The laws regarding weapons in California are (like most of our laws), complicated, nuanced, counter-intuitive and not entirely rational.  We have specific rules to govern all sorts of weapons, including some you've probably never even heard of (what the hell is a "sandclub"?).

Today, I want to talk specifically about knives, striking weapons (like clubs and batons), martial arts weapons, and a few other favorites.  I'll reserve firearms for another day because guns probably deserve their own post.

For the sake of easily understanding how all the laws on this subject work together, I've created my own handy 4-tier classification system.  This is an over-simplified glance at a few common weapons and the restrictions regarding their possession and use.  Since I invented this chart, you won't find it in any law book.  Don't cite to this chart in court or when you're dealing with police.  Nobody will know what you're talking about if you argue that your folding knife is a "Class-4 pocket knife" and not a "Class-2 switchblade".  The chart is just a simple way to wrap your head around a complicated and poorly-organized series of laws.

My 4 tiers are as follows:

-Class 1:  Weapons that are illegal to own, possess, manufacture, import, sell, loan, give away, offer for sale, etc.  Put simply, these weapons are ILLEGAL in California for any purpose.  You could be arrested just for having them in your own home for self-defense (with a few exceptions).

-Class 2:  Weapons that may be owned or possessed at home, but may not be carried in public or within the passenger area of any vehicle.  Class 2 weapons may be manufactured and / or imported into the state, but may not be sold, loaned, transferred or given away in California.

-Class 4:  Weapons that may be carried and concealed upon the person, subject to some restrictions.  Generally, law-abiding adults may possess weapons in this category for self-defense.  Felons, addicts, minors, people on probation, and people with certain misdemeanor convictions may be prohibited from carrying even class-4 weapons.  Class-4 weapons include:


There are many possible defenses to weapons charges in California.  Often, illegal weapons are discovered by police during illegal searches of your property.  If a search is performed without your permission, without probable cause and without a warrant, there may be grounds to suppress anything discovered as a result of that search.  Only a qualified criminal defense attorney can tell you whether or not you might have a defense based on an illegal search or a violation of your right to privacy.

Even if you are found to be in possession of an item that fits the legal description of a prohibited weapon, you might have a compelling argument that the item itself is not actually a "weapon".  If it's an antique, an heirloom, a movie prop, a piece of art, or if the possessor has some innocent explanation for the item (i.e. grandpa brought it home from the war, etc.), then the item might not be a "weapon" within the meaning of the law.  For example, a baseball bat could be used to play baseball or it could be used to break the knees of a rival bookie.  If a person is found in possession of a baseball bat, a baseball glove, a bucket of baseballs and a pair of baseball cleats, then the bat itself is clearly a piece of sporting equipment and not a weapon.  Of course, baseball bats may be used to legally play baseball in California.  On the other hand, if a person is found with a baseball bat behind the seat of his car, with no other sporting goods in the vehicle, he's going to be arrested on suspicion of carrying an illegal baton.  Keep in mind also that "self defense" is not considered to be an "innocent explanation", and it is not a defense if you are charged with possessing an illegal weapon.

If you or a loved one is accused of possessing an illegal weapon in California, call our office for a free attorney consultation.  (714) 449-3335.  Ask for John.